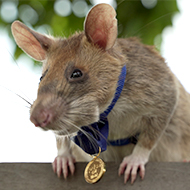 Magawa received the PDSA Gold Medal for his work to detect landmines and other explosive ordinate in Cambodia.

Magawa has saved the lives of countless individuals living in Cambodia.

A giant African pouch rat named Magawa has been awarded the animals' equivalent of the George Cross for sniffing out landmines in Cambodia.

Magawa received the PDSA Gold Medal for discovering 39 landmines and 28 items of unexploded ordinate during his career - clearing more than 141,000 square metres of land and saving the lives of countless men, women and children.

He is the first rat in the charity’s 77-year history of honouring animals to receive a PDSA Medal – joining a line-up of brave dogs, horses, pigeons and a cat.

Magawa was trained by APOPO in Tanzania, a charity that trains rats to detect landmines and other remnants of war. He can identify the chemical compound within explosives and ignore any scrap metal laying around, meaning that he is much faster at detecting landmines than a conventional metal detector.

APOPO CEO Christophe Cox explains: “APOPO’s HeroRATs significantly speed up landmine detection using their amazing sense of smell and excellent memory. We use clicker training to teach rats like Magawa to scratch at the earth above a landmine.

“During training they hear a 'click' and receive a tasty food reward for finding the correct target scent. Unlike metal detectors, the rats ignore scrap metal and only sniff out explosives making them fast and efficient landmine detectors."

He continued: "This not only saves lives but returns much-needed safe land to the communities as quickly and cost-effectively as possible. This in turn will allow the families living around the minefields to improve their livelihoods and get their lives back on track.”

Magawa was formally presented with his unique miniature PDSA Gold Medal via a live link between Cambodia and the UK on Friday (25 September).

PDSA Director General Jan McLoughlin, commented: “The work of HeroRAT Magawa and APOPO is truly unique and outstanding. Cambodia estimates that between four and six million landmines were laid in the country between 1975 and 1998, which have sadly caused over 64,000 casualties.

“HeroRAT Magawa’s work directly saves and changes the lives of men, women and children who are impacted by these landmines. Every discovery he makes reduces the risk of injury or death for local people.

She added: “The PDSA Animal Awards programme seeks to raise the status of animals in society and honour the incredible contribution they make to our lives. Magawa’s dedication, skill and bravery are an extraordinary example of this and deserve the highest possible recognition. We are thrilled to award him the PDSA Gold Medal.”