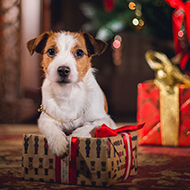 Impulse-buying means that millions of pets are not having their basic welfare needs met.

PDSA vets are appealing to people not to buy pets for Christmas, as new figures show a staggering 4.6 million owners (21 per cent) did no research at all before getting their animal.

Figures from the latest PDSA Animal Wellbeing (PAW) Report also show that fewer than a quarter of owners ensured the breeder they purchased from was part of an accredited breeding scheme. A further 3.4 million owners said they would consider buying from a puppy farm.

The PDSA says that impulse-buying means that millions of pets are not having their basic welfare needs met. And, with pets potentially doomed to live an unhealthy, unhappy life, the charity is warning that impulse buying is ‘fuelling a pet welfare crisis’.

“Owners undoubtedly love their pets and want to do the best by them, but it’s extremely worrying to see that so few did their research before taking them on,” said PDSA veterinary nurse Joanne Wright. “Animals are totally reliant on their owners to provide for their five welfare needs and owners have a legal obligation to meet these needs.

“Without proper research, many potential owners don’t realise the full responsibility of taking on a pet. This can lead to many preventable welfare problems that vets see every day such as rabbits being fed poor diets – leading to severe dental issues."

She continued: "When owners source pets from a responsible breeder, who has invested time and care into breeding healthy pets, they are far less likely to develop problems.”

The PDSA PAW Report is the largest survey into pet welfare in the UK, produced in conjunction with YouGov.

The latest report reveals that 75 per cent of pet owners underestimated the monthly cost of owning a pet, leading to problems with paying bills, buying food and insurance costs.

It also shows that many pet owners are unaware of other key considerations, such as the time it takes to exercise and train dogs. According to the findings, there are currently 1.3 million dogs walked less than once a day and 99,000 that are never walked at all.

In light of these figures, the PDSA is pleading with people not to buy pets for Christmas and to carry out as much research as possible before taking on a pet.

“While it’s tempting to ‘treat’ loved ones to a four-legged friend at Christmas – especially if it’s on children’s letters to Santa – it’s vital to consider the time, money and needs of a pet before taking one on,” Joanne added.