Caerphilly committee gives backing to ban on pets as prizes 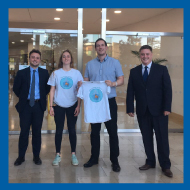 Motion will be considered by full council in due course

A Caerphilly council committee has given its backing to a motion that would ban the giving of pets as prizes on land owned by the local authority.

The motion was brought forward by Councillor James Pritchard, who gave evidence on Wednesday (18 September) alongside Chris O'Brien from RSPCA Cymru. Having received the support of the Council’s Environment and Sustainability Scrutiny Committee, the motion will now go forward to full council on 8 October for final consideration.

There is no legal constraint on the giving of pets as prizes if the winner is over the age of 16. But the RSPCA fears this creates a scenario where the welfare of animals is readily compromised by owners who are not prepared to meet the needs of their new pet.

Between 2014 and 2018 there were 24 incidents reported to the RSPCA concerning the giving of pets as prizes in Wales. Of these, some 60 per cent related to goldfish, but the charity has also received reports relating to ducks, horses, dogs and cats.

Chris O'Brien, RSPCA public affairs and media manager, said: "RSPCA Cymru is firmly opposed to the giving of live animals as prizes. We were delighted to give evidence alongside Cllr James Pritchard on such an important animal welfare matter and to see unanimous support from the council's Environment and Sustainability Scrutiny Committee for action.

"Adding an animal to the family should be a carefully planned and well-researched decision. Giving pets as prizes, however, encourages the complete opposite, and places animals in the hands of owners who may have no understanding of their legal obligations to their new pet.”

Operation Goldfish founder Holly Homer also attended the committee meeting. Her campaign aims to raise awareness of the welfare problems faced by fish that are given as prizes.

She said: "The aim of Operation Goldfish is to ban the giving away of goldfish as prizes at funfairs. It is wonderful to see Caerphilly’s Environment and Sustainability Scrutiny Committee unanimously vote to support this motion. This gives hope that neighbouring councils will follow suit and eventually lead to a blanket ban for the whole of Wales and, hopefully, even further afield.

“This will not only save animals’ lives but raises awareness of the fact that a pet isn't something you win on impulse but instead a creature that you are legally required to care for properly throughout their entire life. It is a pleasure to work alongside RSPCA Cymru & Cllr Pritchard. Together, I hope, we will put a stop to these archaid traditions."