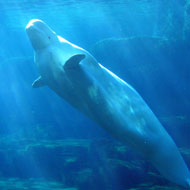 “The relationship between physical condition and oxygen storage capacity may be a vicious cycle in beluga whales."
Scientists investigate the health and condition of northern beluga whales

The physical condition of beluga whales affects their capacity to store oxygen in blood and muscle tissue, and therefore could impact their ability to dive, a new study has concluded.

In the study, an international team of scientists explored the relationship between body condition and oxygen storage in 77 beluga whales in the eastern Beaufort Sea.

They found that concentrations of muscle myoglobin and blood haemoglobin are 12 and 27 per cent higher, respectively, in beluga whales in peak physical condition, compared to those of lower condition.

Scientists estimate that these differences are equal to at least a three-minute reduction in maximum dive time of the whales with the lowest body condition. The findings are published in the Journal of Experimental Biology.

The international study started in response to a 2014 report into the growth rates of Beaufort sea beluga whales. The report concluded that the beluga whale growth rate had declined over the past 20 years as a result of climate change.

Because diving depth in toothed whales is linked to body size, the researchers set out to see if the smaller size could affect their ability to dive. However, they found that body condition and not body mass was the most important factor predicting blood and muscle oxygen storage capacity.

Previous research suggested that the northward migration of less energy-dense prey species was the driving force behind the fall in body condition.

“Considering that the peak biomass of Arctic cod, the beluga’s main prey, is found between depths of 350 to 500 metres, and that the largest and most energy-rich cod are found at the deepest depths, declines in body condition may affect the ability of the whales to reach their preferred prey,” explained lead author of the study Dr. Emily Choy, a researcher at McGill University, Canada.

Dr Michael Berenbrink from the University of Liverpool’s Institute of Integrative Biology added: “The relationship between physical condition and oxygen storage capacity may be a vicious cycle in beluga whales, in which environmental changes resulting in decreased condition of the whales, affects their ability to forage, leading to further reductions in their condition through the diminished consumption of their prey.”