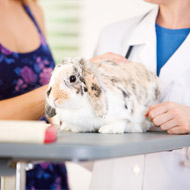 A total of 43 per cent of vets said they had seen rabbits that were living alone.

More than 70 per cent of vets have seen pet rabbits who were not having all their welfare needs met, according to a major BVA survey.

Some 1024 companion animal vets answered questions about rabbits in the BVA’s Spring 2019 Voice of the Veterinary Profession survey. Among the top concerns cited were owners not providing a suitable diet (78%); rabbits being housed alone or with other species (76%), and rabbits being cared for in an inappropriate environment (72%).

Furthermore, a total of 43 per cent of vets said they had seen rabbits that were living alone. This is despite a general recognition that a solitary lifestyle can have a negative on a rabbit’s physical and mental health.

The figures come at the start of Rabbit Awareness Week (RAW) (1-9 June), a campaign that looks at key rabbit health and welfare issues to help the public and professional community better understand their needs. This year, the campaign is raising awareness of RHDV2 (rabbit haemorrhage disease type 2), a new variant of RVHD1 which can be fatal in as little as two days.

A report by the PDSA in 2018 revealed that preventative healthcare in rabbits is a much-neglected area. As such, vets are asking UK rabbit owners to register their animals with a vet and ensure they are vaccinated against RHDV2 and other diseases.

“Rabbits can make lovely pets, but it is very worrying to see that so many are falling short of having their basic health and welfare needs catered for,” commented BVA junior vice president Daniella Dos Santos. “Rabbit Awareness Week is a great way to shine a light on some of the ways that we as professionals and owners can help make pet rabbits’ lives healthier and happier.”

She continued: "One of our most recent surveys revealed that 98 per cent of vets had been questioned by their clients on the need for vaccinations. Anecdotally, rabbits are also often one of the pet animals that we see the least.

"Vets are always happy to offer advice on pet care and would far rather be presented with a list of questions from owners than not to see a pet at all! To protect against disease, the best thing you can do is to vaccinate your rabbits.”

RAW is an annual campaign backed by veterinary professionals and animal welfare charities. To find out how to run the campaign in your practice and to download a series of resources, please click here.